As you likely saw on the news, Hurricane Irma recently ravaged the United States. It caused mass flooding and disruption to the lives of many in Florida and other southern states. Some of those states, particularly Georgia, had their pecan harvests decimated by the storm. The University of Georgia Extension said that Irma was “the most damaging wind event ever seen by the Georgia pecan industry.” END_OF_DOCUMENT_TOKEN_TO_BE_REPLACED

Here are the rules for the Greatest Dad Give Away contest for 2015.

Pecans have been a hot topic in the news within the last few years and rightfully so.  This versatile nut ranks highest among all nuts in antioxidant capacity.  Pecans contain more than 19 vitamins and minerals – including vitamin A, vitamin E, folic acid, calcium, magnesium, phosphorus, potassium, several B vitamins and zinc. One ounce of nutrient dense pecans provides 10% of the recommended Daily Value for fiber.   From lowering cholesterol to helping fight diseases like Alzheimer’s and Parkinson’s to enjoying pecan pralines, nothing compares to the pecan!

Below is portion of an article from http://farmflavor.com/how-do-you-say-pecan-mapping-food-dialect-trends-across-the-u-s/ow  for you to enjoy.

How do YOU say pecan?  Turns out, it depends on where you’re from.  Joshua Katz, a doctoral student studying statistics at NC State University, recently created interactive dialect maps using data from Bert Vaux at the University of Cambridge. For example, check out the map showing how people pronounce “pecan”: 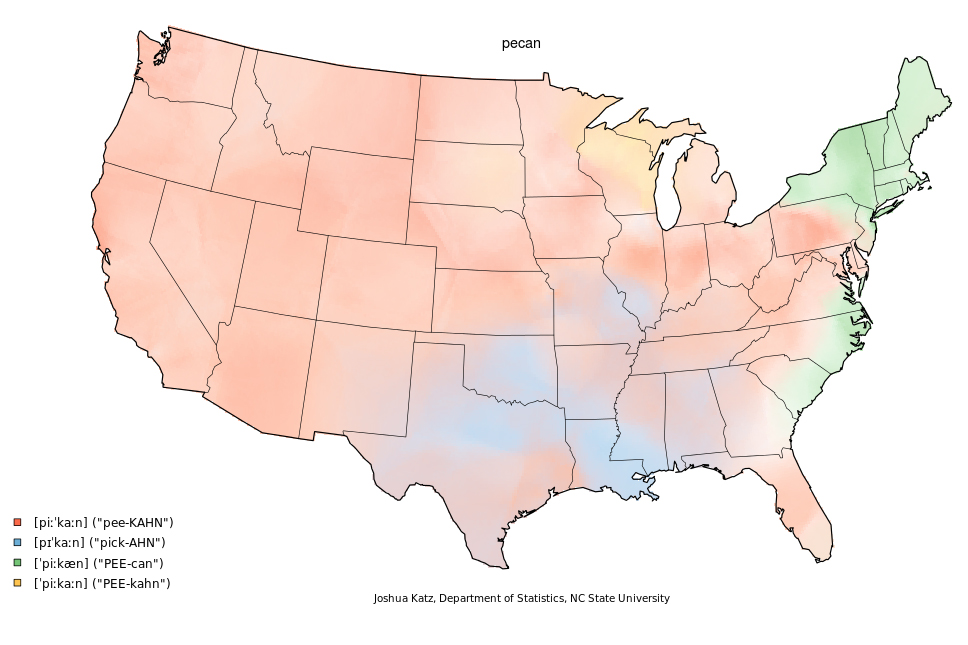 It shows that pee-KAHN is dominant nationwide, but in areas of Texas, Oklahoma, Louisiana and Mississippi, pick-AHN reigns supreme. PEE-can is popular on the East Coast and in New England, while folks from Wisconsin, northern Minnesota and Michigan’s Upper Peninsula go with PEE-kahn.

The linguistics department at the University of Wisconsin-Milwaukee just also shared a pecan pronunciation map that gives another option – where people may say pee-KAHN by itself, but then say PEE-can when using a compound word, like pecan pie.

So again – How do YOU say pecan?  Leave us a comment….

It is hard to believe Spring is finally here!  As always things are always busy in the pecan orchard.  The pecan trees are have been pushing noticeable leaf growth out daily.  Male catkins are showing up from top to bottom of each tree.  Catkins release pollen when mature.  Female flowers will be showing up soon.  We will monitor female flowers closely as the amount of female flowers can be a good indication as to a heavy crop, light crop or NO crop of pecans for this season.  Mark has planted most of our 2 year old pecan trees – we try and replant anywhere from 75 to 125 trees each year.  We lose some trees from year to year due to wind damage, disease, and lightning.  Some of our trees are slowly dying from damage from back to back hurricanes – Rita and Ike.   All for now – gotta ride my horse under the pecan trees –  I so love this Nut Farm!

Antioxidants in Pecans May Contribute to Heart Health and Disease Prevention

ScienceDaily (Feb. 28, 2011) — A new research study from Loma Linda University (LLU) demonstrates that naturally occurring antioxidants in pecans may help contribute to heart health and disease prevention; the results were published in the January 2011 issue of The Journal of Nutrition.

Pecans contain different forms of the antioxidant vitamin E — known as tocopherols, plus numerous phenolic substances, many of them with antioxidant abilities. The nuts are especially rich in one form of vitamin E called gamma-tocopherols. The findings illustrate that after eating pecans, gamma-tocopherol levels in the body doubled and unhealthy oxidation of LDL (bad) cholesterol in the blood decreased by as much as 33 percent. Oxidized LDLs may further contribute to inflammation in the arteries and place people at greater risk of cardiovascular problems.

“Our tests show that eating pecans increases the amount of healthy antioxidants in the body,” says LLU researcher Ella Haddad, DrPH, associate professor in the School of Public Health department of nutrition. “This protective effect is important in helping to prevent development of various diseases such as cancer and heart disease.”

These findings are from a research project designed to further evaluate the health benefits of pecans, according to Dr. Haddad. She analyzed biomarkers in blood and urine samples from study participants (a total of 16 men and women between the ages 23 and 44) who ate a sequence of three diets composed of whole pecans, pecans blended with water, or a control meal of equivalent nutrient composition. The pecan meals contained about three ounces of the nut. Samples were taken prior to meals and at intervals up to 24 hours after eating.

Following the test meals composed of whole pecans and blended pecans, researchers found that amounts of gamma-tocopherols (vitamin E) in the body doubled eight hours after both meals, and oxygen radical absorbance capabilities (ORAC — a scientific method for measuring antioxidant power in the blood) increased 12 and 10 percent respectively two hours after the meals. In addition, following the whole-pecan meal, oxidized LDL cholesterol decreased by 30 percent (after 2 hours), 33 percent (after 3 hours), and 26 percent (after 8 hours).

“This study is another piece of evidence that pecans are a healthy food,” says Dr. Haddad. “Previous research has shown that pecans contain antioxidant factors. Our study shows these antioxidants are indeed absorbed in the body and provide a protective effect against diseases.”

Research from Loma Linda University published earlier in theJournal of Nutrition showed that a pecan-enriched diet lowered levels of LDL cholesterol by 16.5 percent — more than twice the American Heart Association’s Step I diet, which was used as the control diet in that study. Similarly, the pecan-enriched diet lowered total cholesterol levels by 11.3 percent (also twice as much as the Step I diet).